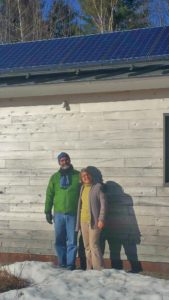 When Eric and Alison Rector learned last January that a “Bomb Cyclone” was blasting much of New England and pummeling the Maine coast, the couple was on vacation in Mexico. They soon discovered that many people in Maine were without power. Yet, Eric and Alison knew their new home was safe from freezing pipes and would continue to have running water for their pet sitter. Their high-performance home uses a dynamic combination of energy efficiency and solar energy with battery backup installed by Sundog Solar.

The Rector’s 6-kilowatt solar system provided the emergency support they needed during the 6-day power outage. “One 48-volt battery bank gives us running hot and cold water, heat, ventilation, lights, and power for some appliances,” says Eric. “If our solar system didn’t have batteries, we would be stuck with no power during grid outages despite all our solar panels.”

As long-term residents of Monroe, Maine, the Rectors are no strangers to power outages. “We know that on this road, the power goes off monthly, perhaps for just an hour or so,” explains Eric. “It used to be that if we had any high winds or storms, the electricity would go out. In the 1998 Ice Storm [when the Rectors lived in a neighboring house], the power went out for 11 days.”

Sundog Solar engineered the Rector’s solar system in 2014 to have both on-grid and off-grid capabilities. It features a Conext XW 4548 inverter/charger that charges a Rolls S-530 battery bank, and then sends excess generation to the grid. When the couple added a second row of panels to the array last year, the system started generating enough net energy to power the home throughout the year and excess to charge their 2017 Chevy Volt electric vehicle. Eric and Alison can then drive the car 50 miles with solar electricity.

“I call the Conext XW 4548 ‘the magic box’ because it seamlessly transitions between being on-grid and off-grid,” says Eric. “The way Sundog Solar designed the system, the ‘magic box’ keeps the battery bank full at all times when there is grid power. During outages, there is no need to switch anything manually. All our critical systems stay powered, and the solar system charges the batteries until the grid power returns.”

The Rector home was designed and constructed by GO Logic and is built to the Passive House Standard, a stringent German certification for energy efficiency. The house features a solar orientation, triple-pane windows and doors, a Zehnder heat recovery ventilation system, and generous amounts of insulation in the slab, walls, and ceiling. The couple also saves energy by using LED lighting and an induction stove. The 1,100 square-foot home is heated by a combination of electric baseboard and a propane heater and required less than 1,000 kWh to heat the home last year.

Interested in installing a grid-tied solar system with battery backup? Contact Sundog Solar at 207.548.1100 for a free phone consultation about solar for your home or business!