The Town of Thomaston, Maine, is installing a 503 kW solar system near its wastewater treatment plant. Sundog Solar of Searsport, Maine, designed and is installing the solar project.

The 1,290-panel solar farm will soon produce an estimated 90% of the power for the town, including the wastewater treatment facility, fire station, town office, public works, and street lights. Sundog Solar installed the solar system next to wastewater lagoons on town property.

Instead of entering a Power Purchase Agreement (PPA) for solar energy, like numerous municipalities in Maine, the town will own the solar installation outright. This project was made possible with a low-interest loan through the Maine Municipal Bond Bank.

“We can install the solar energy system with no increase in taxes or resident fees,” said John Fancy, superintendent of Thomaston Pollution Control Department. “Instead of paying a higher electricity bill, much of the electricity savings will go towards paying off the loan.” That means the project will be cash flow positive right away.

Wastewater treatment facilities are energy-intensive to operate due to the need to move millions of gallons of water throughout the treatment process. The Thomaston Wastewater Treatment Plant is a modern lagoon-type facility constructed in the 1990s. It contains three aerated lagoons and is vital to protecting the water quality in the St. George River.

The solar facility at the Thomaston wastewater treatment plant is part of a larger vision that embraces renewable energy and energy conservation. According to Fancy, the town is always looking for opportunities to reduce its reliance on fossil fuels and lower operating costs. 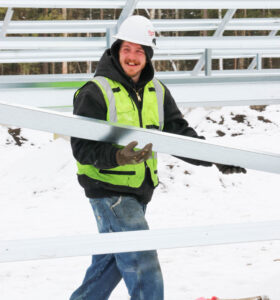 “We recently converted all the streetlights to LEDs. The town used to pay between $28,000 and $30,000 annually to power the streetlights, and now we pay between $4,000 and $5,000. We replaced an outdated boiler with an energy-efficient propane unit and a heat pump. The town also installed an electric vehicle charging station to support clean transportation.”

The wastewater treatment plant already has a small rooftop solar array that was installed in 2010. Fancy is pleased with the amount of power that the solar system has produced and that its output hasn’t dropped noticeably over time. He is also impressed by how much solar panel technology and efficiency have advanced in the last decade.

Sundog Solar selected bifacial solar panels for the project. “The solar panels can produce energy on both sides, front and back,” explains Danny Piper, Co-owner of Sundog Solar.” This technology is gaining popularity now that the prices have dropped.”

To date, this is the largest solar system installed by Sundog Solar. The company was founded in 2009 and has installed systems on MDI High School, Mid-coast School of Technology, and the towns of Waldoboro, Tremont, Damariscotta, and Oakland, to name a few.