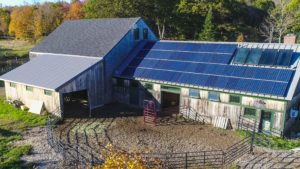 As the cost of batteries for solar energy drops and the capabilities increase, homeowners are increasingly looking to solar-plus-storage technologies for greater energy independence and resiliency. Natural disasters and extreme weather events in 2017 highlighted power grid vulnerabilities and the benefits of energy storage solutions.

Solar installers are seeing increased consumer interest in battery technology for solar energy. Once prohibitively expensive, such batteries are plummeting in cost and have gained considerable media attention. The Tesla Powerwall has caused solar battery technology to explode in popularity and capture public interest.

“In Maine, it is common to have grid outages that last for multiple days,” says Chuck Piper, co-owner of Sundog Solar. “We have been getting more inquiries about solar systems with battery backup than ever before. Homeowners are finding this technology increasingly appealing as the prices fall and the technology improves.”

The Benefit of Batteries

Grid-tied photovoltaic systems with batteries can operate during power outages or whenever you want to use the stored energy. A critical load panel determines which home electronics will be powered by the batteries during power outages. Homeowners prioritize the most crucial loads until utility service is restored. It is often too expensive to power all appliances, such as air conditioners and entertainment centers, because the capacity of the batteries limits the total energy that can be stored.

In some utility districts, power can be much more expensive at certain times of the day. Owners of solar systems with batteries can use the stored power when rates are highest, saving money with cheaper solar power.

Link to article on Earth911.com