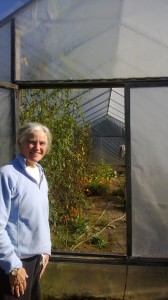 I visit Anne and Dana Douglass in lovely Deer Isle in late October. Their home is considerably isolated- a spectacular drive over the Deer Isle Bridge, and down several winding roads. The front door to the Douglass’ home is approached through the gardens that surround her traditional, natural shingled Maine home, providing enjoyment of the burning bushes that are in their full fall glory. Nothing immediately identifies it as the extraordinary off-grid home it is, at least not from the road.

After Anne returns from a tennis game, we share tea and chat inside her spacious home, with windows all around providing passive solar, especially today. She points to the South-facing pole array out of the back window. Anne explains that after the recent Sundog Solar installation, which consists of 9 Canadian Solar PV modules, 16 6v Rolls batteries, and Magnum Energy inverter/charger and an Outback charge controller, they are ‘living large.’ Now they even use a freezer.

The Douglass’ property happens to be a half a mile away from the nearest power lines, which 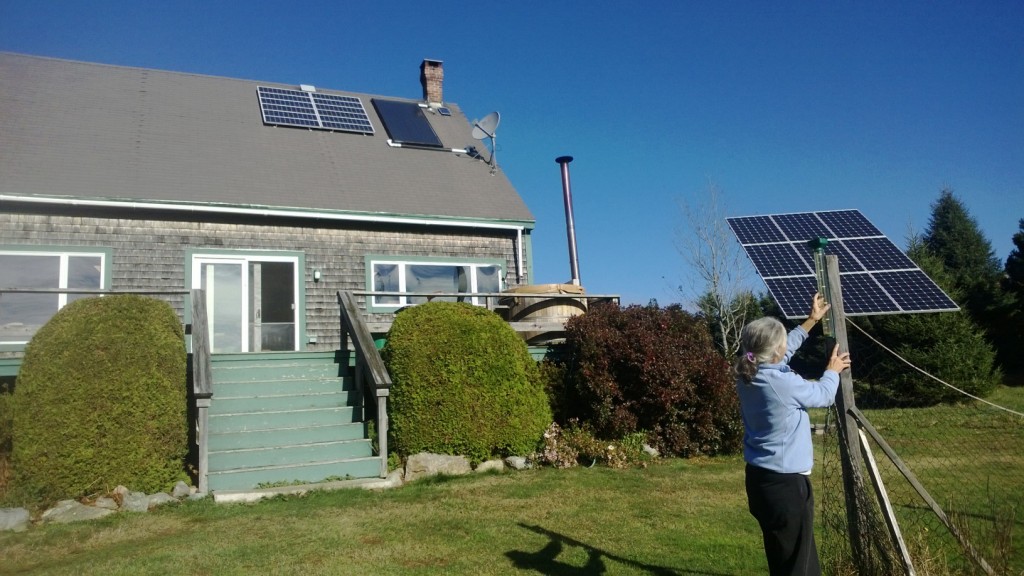 was one consideration in the couple’s decision to be off-grid. Had they elected to hook up to the grid, this would have cost them $11,000 back in the 1990’s when they first bought the property. Since the property had great Southern exposure, they decided to follow in the footsteps of Dana’s sister and brother-in-law, who were already living off-grid. Ultimately, Anne and Dana “ wanted to be good stewards of the earth.” Her brother-in-law built the post and beam in Gorham and they trucked it down to Deer Isle to build their house. The couple has been completely off-grid since 1998, the prehistoric age of off-grid living.

Anne provides perspective on the recent upgrade. For nine years, the family of four managed with one solar panel and batteries for their electricity and then added a hot water collector. Ann describes the ‘routine’ of living off-grid, which necessitates some forethought. Back in the days before they had the hot-water collector it meant firing up the woodstove when you wanted a shower, or in the summer using a sun-shower on the porch. Showers weren’t optional for the family. “Both my kids were athletes. I ran every day. There used to be a tank in the kitchen and we’d fire up this stove.” Anne laughingly admits  “Our kids are a little upset that we waited until they were out of the house to get the on-demand hot water, (a Rinnai propane heater) not to mention the addition of the nine solar panels.” 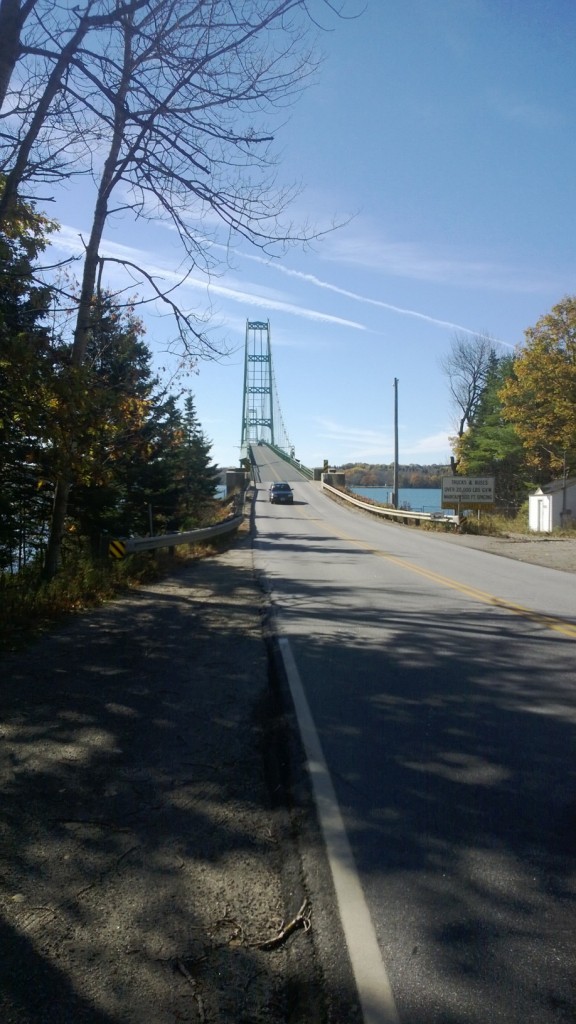 After years of relying solely on a single solar panel for electric, propane for cooking, and wood for heat and gas generator for use when there was a slough of cloudy days, the couple began making upgrades three years ago, when they got the on-demand (propane heated) hot water and the solar panels. “Now we have a generator that you turn on with the flick of a switch. This is our third batch of batteries. In the first batch, we were battery rich, but without much solar to power them. We didn’t get the best advice early on. When we purchased the next batch, we were running out of power. Now, with the Sundog Solar installation we finally have the right balance.”  These days, Anne explains, the ‘off-grid routine’ means adjusting the PV modules to the correct angle. Anne grins and tells me before their recent Sundog Solar addition, they relied entirely on their neighbor’s freezer for putting up all their vegetables, whereas now they can keep part of them right here.

Anne and Dana met in Vermont. The couple began their married life by leaving their respective jobs to take a year-long bike ride. In addition to their careers, Anne’s as a k-8 teacher for over 35 years, and Dana’s as a minister, the couple also operated a canoe and kayak tour company in Stonington. Additional details pile up that illustrate the principles integrated by the couple into their life routine. Anne tells me “Just yesterday, we took our three pigs…” (She grows silent and then continues.)  “Anyhow we had quite the day yesterday getting them into the trailer. Yes.. that was a long day.” Dana is a meat-eater and hunter whereas Anne is a vegetarian. Anne describes her husband’s respectful approach to hunting and her tolerance of their different diets. The couple has chickens, and more recently, pigs and sheep.  “We haven’t ever had pigs before.’ (she whispers) And I don’t think we will again. It’s quite something to get their (the pigs’) food from a couple of the area restaurants and also Haystack School. It’s quite a long drive- ten miles- a forty minute drive.”  I nod, recalling the Maine roads I’ve travelled to get here. 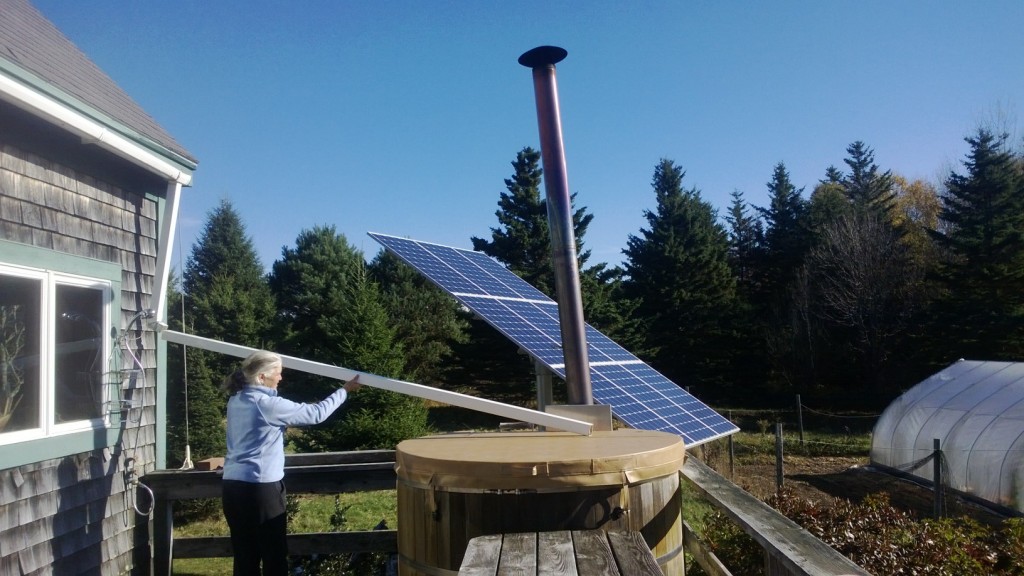 It’s intriguing to realize how conscious the family is of their materials and energy-use. When asked to describe the experience of being in close relation to their materials and consider whether it causes the family to use less, Anne replies “When I visit other people, I can’t believe that people leave things plugged in, drawing energy.  We have a satellite dish and everything is on a strip, so anything that is plugged in is turned off. When you charge something, you unplug it. It was great with the kids. We never got Nintendos.  It was a case of we just don’t have the power for it.”

Essentially, the family is moving in relationship to the sun.  “You’re getting this limited thing. Interestingly, in January, if it’s a sunny day, we don’t even have to get the wood stove going until three in the afternoon. Due to the passive solar, when the sun is so low in the sky, it streams in, whereas in the summer months it is higher and can’t do that.”  Anne reflects on the family’s relationship to their materials and the elements. “Part of our decision to be here is that we are people who are outside a lot. We grow a lot of our own food. We have a wood-fired hot-tub. We are very conscious of the stars.” 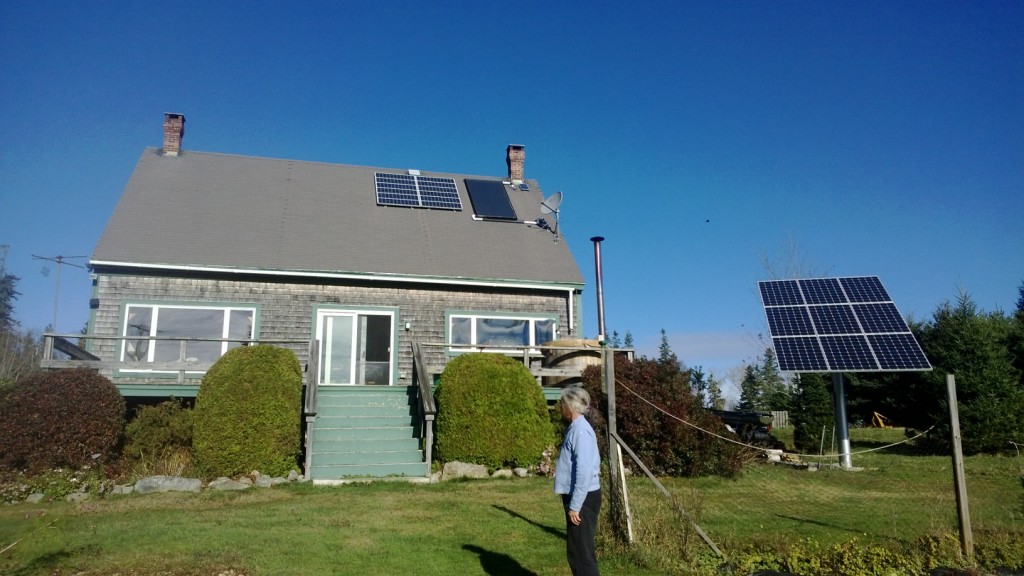 When asked to enumerate the benefits of living off-grid, aside from the simplistic idea of ‘payback’, Anne says “I’d much rather go pick out a bunch of vegetables than drive to a restaurant. You pay more in time. It’s odd to pay people to do things. We like making stuff.”  Anne points to chair cushions she has just made and tells me her husband, Dana ‘does carpentry stuff.’ ” We’ve never been evangelical solar people. There are tours, but we’ve never jumped into that culture. We traveled last year in Arizona. I’m flabbergasted that there aren’t solar panels on every roof.  Arizona gets twice the annual sun that we get.”

“With teaching, I modeled behavior I wanted to see. I guess it’s the same in this regard. Our friends when they come over, there’s some gradual dawning. You’d never know we were living off-grid. When they find out they are surprised.”  It’s certainly striking that the couple powers all of their needs without any sacrifice of lifestyle. The home has everything any home has. Anne points to the refrigerator- “It’s a Sunfrost- we’ve had it for 20 years. They still make it in California. What’s great is they put the motor on top, so it doesn’t heat the food from below. The cookstove pipe heats the bedrooms upstairs. That’s the other thing I wonder about. Putting chimneys outside doesn’t make much sense when you consider that the two chimneys are inside the house to help the draw, and to help heat the upstairs. It’s also curious that there isn’t more solar, especially considering the island loses power a lot. When there is an ice-storm and the power goes, we never even know about it.”

Anne laughs about the ongoing seasonal task the couple undertakes together of adjusting the degree of the panels to match the angle of the sun. Her description sounds like a sort of comedy routine. “Dana’s going to want to do it faster than I want to do it. The next adjustment is going to be almost vertical. November always seems to be the worst for solar production. When we re-roof our home, we’ll reconsider the original system and whether to relocate the one solar roof panel. That’s what is so good about Sundog- they understand how to integrate the new system with our older system.”

I ask Anne whether she uses the remote battery voltage meter. The Douglass’ system comes with this nifty device to check on the amount of power in the battery bank. Anne hasn’t had to look at the production since energy is never in short supply, although her husband Dana checks out of interest. “With this system, it takes not very long at all to charge, whereas it took all morning to charge the batteries using the old system. We never thought we’d have a freezer. We freeze a lot of veggies and Dana gets his deer.” The convenience of walking downstairs to the freezer still seems like a luxury to Anne and Dana.

We continue our chat as Anne hangs her laundry out to dry on the sunny back deck. What’s really striking is the sense of total delight the family seems to experience in discovering how to live by their own efforts. There is certainly no sense of privation. On the back porch, the hot tub serves as a cistern in the summer that waters the garden via a water catchment system above and hose that drains from the hot-tub to the garden beds below.

When I ask ‘So, it seems like your choice to be off-grid was ultimately determined by the thought ‘why wouldn’t you?’ Anne replies “Yes, it was, not to mention even in the 1990’s we were all aware of limited resources.”