Published on September 16, 2019, in the Bangor Daily News 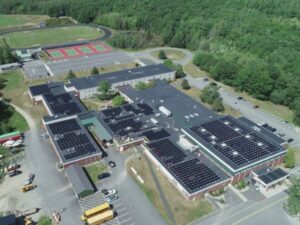 This summer, Sundog Solar has installed 1,450 panels on the roof of MDI High School in Bar Harbor that, according to school officials, uses roughly half a million kilowatt hours per year. The panels are expected to have a total output capacity of 435 kilowatts, which is enough to power roughly 3,000 household refrigerators at the same time.

At the fishing co-op, located on Little Cranberry Island off MDI, the same company also has installed approximately 150 panels on the roofs of buildings on the pier. The 45-kilowatt array is expected to generate 51,000 kilowatt hours annually. In 2017, the average residential power usage in Maine was 550 kilowatt hours per month, or 6,500 kilowatt hours per year, according to the federal Energy Information Administration.

“I am incredibly proud of the collective efforts that have led us to this momentous occasion,” Matt Haney, principal of the high school, said in a statement released through A Climate to Thrive, a group that promotes sustainable living on MDI. “We would not be at this place without a phenomenal partnership comprised of our students, alumni, staff, elected officials, Sundog Solar, A Climate to Thrive, and the entire MDI-area community.”

In a statement on its webpage, the Fishermen’s Co-op said it voted in April to put solar panels on its roofs after students at the College of the Atlantic in Bar Harbor conducted a feasibility study and determined the project would work. According to the U.S. Department of Agriculture, which helped finance the project, use of the solar panels will save the co-op $8,020 annually.

“By going solar we will be able to produce 110 percent of our needs, which will reduce our carbon footprint by 22,073 pounds of CO2 per year,” the co-op said.

The solar projects are among several recently proposed for or developed in Hancock County.

Around 500 panels were installed in Tremont in late 2018 at a former landfill as part of a municipal project in that MDI town, and in July, 57 panels were installed on the roof of the Ellsworth building that houses Fogtown Brewing Co. The project at the brewery, funded in part by a $9,750 grant from Agriculture Department, each year is expected to provide more than 20,000 kilowatt hours of power and roughly $3,600 in savings on Fogtown’s electricity bill.