A vast expanse of perfectly mowed grass surrounds the classic home of Randy Curtis. A sign above the door to the bar reads “Almost a Farm.” It is a glorious spring day in early May, the likes of which Mainers have reason to suspect may never be repeated. Can this be the right house? Where are the solar panels? There are no signs of renewable energy or the 6000 kw system Sundog Solar recently installed. Randy’s father, Mr. Curtis answers the door, so this is the right place, although the classic home conceals the new system, which is capable of producing approximately nine hundred and seventy five dollars worth of electricity per year, along with a Fujitsu heat pump. 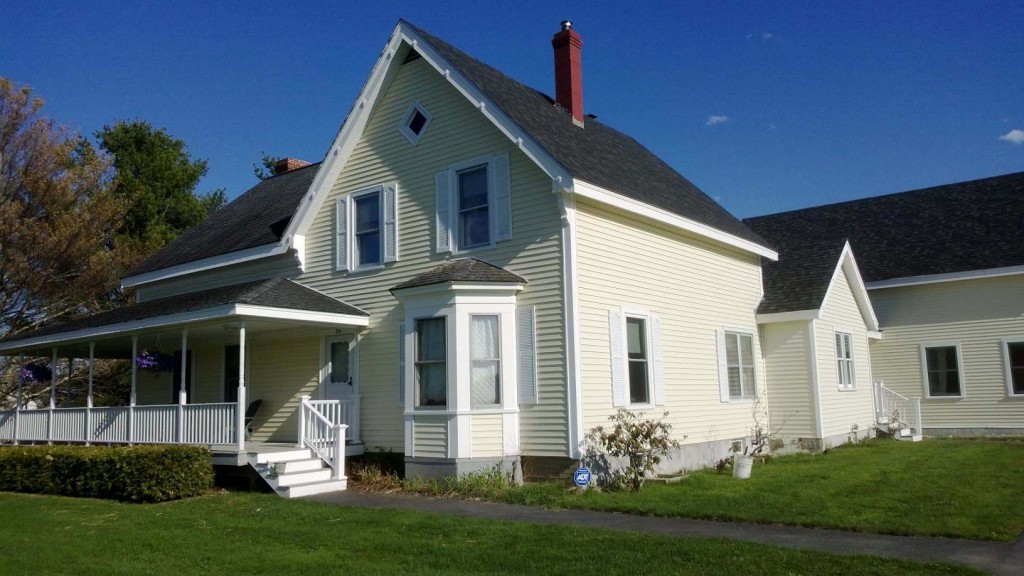 Beginning in the pool-room, Randy begins a generous tour of his home, which he shares with his wife and both of his parents, now in their 90’s. What is immediately striking is the juxtaposition of new technologies with the old furnishings – the sleek fujitsu mini-split heat pump above the wooden curio cabinet and faded nature lithograph. Randy explains that we are standing in the addition, which is evident only by the original exterior window, now interior.
The unobtrusive Fujitsu mini-split heat pump mixes in easily with the Curtis family antiques. The Curtis home has five heat zones, including the recreation room, pictured.

Randy opens the door to the back porch. Apologetically, he warns: “you’ll be opening a lot of them” and follows up with “the house is too big.”

Now, crossing over from the wrap-around porch onto the lawn in the back of the house, it is possible to see the solar panels, all twenty-four of them, aesthetically arranged on the Southside. He waxes poetic about the know-how of the Sundog installers and jokes about the invisibility of the system. “Sundog was pretty mad, I guess.“ There is no advertising of the renewable energy installation to passersby. You’d never know this classic, Americana home nearly produces all of its own energy. Yet, Randy’s home, which originally belonged to his Uncle, has been undergoing a round of renewable energy upgrades and improvements since the renovation ten years ago. Randy points out the 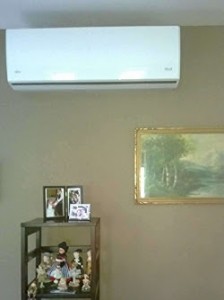 barn rooftop with perfect Southern exposure that may also hold solar panels in the future. “My goal is 85% sustainability. It’s partly having the big house that makes me want to reduce my carbon footprint.”

We return indoors to tour the upstairs, which retains a touch of the pre-renovation era, with original wallpaper in two rooms and ancestral photos. Randy shows me a video featuring progressive scenes of the renovation on his laptop and points out his suspendered father, hard at work on the construction of the foundation. “My father was only 82 then.” On the screen, I watch as Randy tears away an entire wall with his tractor. Gradually, scenes of destruction settle into the tranquil scenes, identical to the rooms I am now touring. In addition to the house, Randy tells me casually that he also built his camp, pointing out the beautiful wooden moldings 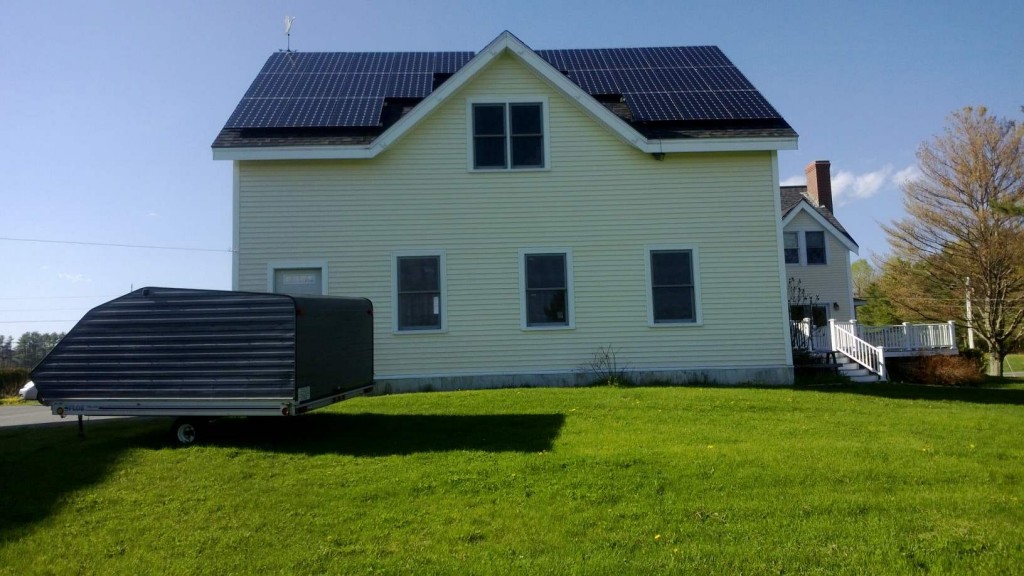 that perfectly match the original woodwork. Despite the rustic nature of his camp, he is considering some renewable energy options there, too.

As we descend to the basement, the age of the house becomes more evident with the stone foundation and old black oil tank, adjacent to an impressive pellet boiler and hopper installed by another Maine renewable business in Portland. 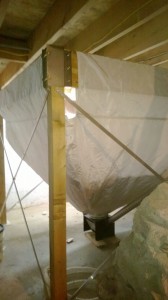 There is a Camlock fitting on the outside of the house that allows for truck loading of pellets right into the basement, where a huge hopper drops pellets right into the burner with the use of gravity feed. Randy shows me the inverter for the solar panels and checks his daily solar energy yield on the monitor. He explains that his overages go toward his annual usage. He didn’t have any energy bills for 9 months of the year until he installed the heat pump, but of course, his oil bill was offset. When asked whether he’s up for a personal photo, Randy suggests Sundog substitute a photo of Mel Gibson. It’s doubtful that Mel Gibson comes anywhere near Randy Curtis in terms of renewable energy production! It’s particularly impressive considering where Randy started, with a classic New England wooden home, which can seem daunting for homeowners hoping to make improvements.

The house keeps unfolding like an accordion. Next up is a huge loft above Randy’s garage, where he is busily building a man-cave with a dry sauna for therapeutic use and sore muscles. It’s hard to image when Randy would have time with all these big projects, considering the next one is right in front of us- dangling insulation to be stuffed into the eaves. Randy explains that he will need another heat pump for the space- a 6th climate zone! A lot of effort goes into staying warm in Maine and part of the trick is keeping the heat where it needs to be.

Last up is a tour of the barn, which was also renovated, mostly to preserve its beautiful original beams. No renewable energy here, but two covered cars inside take the focus- a blast of beauty from the road-dreams of past as Randy uncovers a pristine grey Mazda rx7, something you’d imagine in California in the 80’s, and a second red rx7. Randy is ready to sell but doubts he’ll get any bites. “No one will ever believe they are in perfect condition. Maine weather.” He opens the hood of the grey beauty to reveal the absolutely pristine engine, and mothballed interior. No weather exposure here!

Outside on the driveway, in response to our thanks for his time and the tour, Randy explains that his time doesn’t cost a thing since he is retired. Instead of the expected sigh of relief, Randy produces a sorrowful sigh. He misses his job as grants administrator for MBNA, a happy partnership that ended when Bank of America bought MBNA out. Over the course of eight years, Randy had the improbable dream job of dispensing grants to teachers and facilitating their project proposals. Books, books, books. That’s what it bought. And projects. Randy explains how he tried to make it easier for hard-working teachers unaccustomed to grant writing. It’s a remarkable story, thanks to the confluence of caring individuals. With customary humor, Randy explains the surprise effect of telling the teachers that their $500 grant requests weren’t approved, and after a beat, reassuring them that unfortunately, instead, $1000 grants were going to be issued. For eight good years in Mid-coast and central Maine, teachers had some luck through Randy Curtis and MBNA, whose CEO was married to an educator. Despite the lack of a photo, the interview concludes with the thought that Randy is an unforgettable person. It’s always about the people!